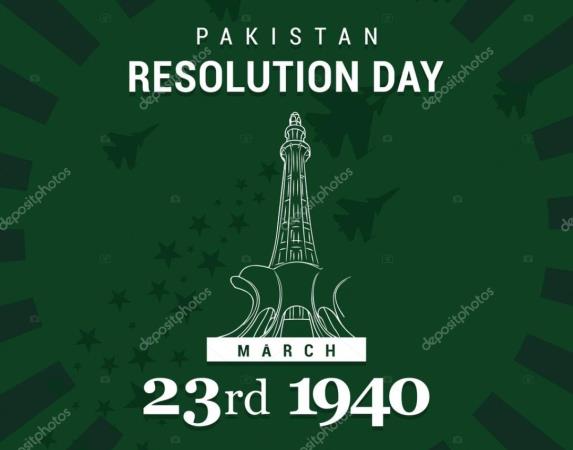 On a crisp spring day in 1940, under the shadow of the Badshahi Mosque, in a city that has been at the heart of the Muslim subcontinent for centuries, a group of men resolved to create a separate homeland for their people.

Surrounded by leaders of the All-India Muslim League and the Khaksars, Muhammed Ali Jinnah took to the stage in Minto Park to address the thousands in attendance, laying down the unequivocal demand for Pakistan. The Lahore Resolution, signed the next day on 23rd of March, became the bedrock on which the struggle for Pakistan was built.

Today, on the exact spot where the founders of the nation once stood, stands a monument that not only commemorates that momentous occasion, but whose history mirrors the fortunes of the young, struggling nation. For the keen eyed, within the flowing white lines of Minar-e-Pakistan can be seen the vision of the new state, and the ideals meant to guide it.

Minto Park – like much else in British India – was named after English nobility; in this case Lord Minto, Viceroy and Governor-General of India. Once a parade ground for the British military, the park was an important symbol of Pakistan’s colonial legacy – one that needed to be replaced by an equally important symbol. As the turbulence of a bloody Partition and the pressures of mass migration began to subside, Pakistan looked to do just that. In 1959, Field Marshal Ayub Khan commissioned the creation of the monument and the first stone was laid on 23rd March 1960, exactly 20 years after the Lahore resolution was passed.

However, the ambitions of Ayub Khan soon met with reality. The new state of Pakistan could not afford a grandiose monument – symbolism had to replace sheer scale. Even this revised goal needed extensive funding – which the government of Punjab arranged by instituting the Pakistan [Day] Memorial Cess (Punjab) Act, 1964, which taxed racecourse and movie tickets. Still, Ayub Khan needed the right man for such a job; and fortunately, he found exactly what he was looking for.

The story of Minar-e-Pakistan is entwined with the story of its builder; Nasreddin Murat-Khan. Born to a Turkic family in Dagestan, Murat-Khan’s struggle against the Russian Empire’s occupation of Muslim-majority Caucasus region parallels the independence struggle in the Subcontinent, albeit with a different result. Unsuccessful in freeing the region, without a home, and living in a refugee camp in Germany, Murat-Khan chose to migrate to newly created Pakistan with his family in 1950. Here in his adopted homeland he used his triple degrees in architecture, civil engineering and town planning from the Leningrad State University (now known as the Saint Petersburg State University) to help build countless iconic structures – such as Gaddafi Stadium and Fortress Stadium in Lahore.

Yet he would be best known for designing and engineering the Minar-e-Pakistan. Murat-Khan’s mixed heritage and his pan-Islamic sense of identity would be reflected in the minaret’s design – a syncretic blend of Mughal and modernist architecture that produced something uniquely Pakistani.

Minar-e-Pakistan rises from the centre of Minto Park’s – later renamed Iqbal Park – verdant gardens. Seen from the air the tower sits on a tear shaped platform which points straight towards the Badshahi Mosque.

The Pakistan Movement is carved into the very foundations of the monument. The first platform is rough-hewn rock from Taxila – its coarseness and disharmony symbolising the early days of the movement. The next step is hammer-dressed stones; they are more uniformly sized, and fit together better – the movement takes shape. Between the second and third platform lie two interlocking crescent shaped pools – the same crescent that adorns Pakistan’s flag, and represents Islam in many cultures across the world. These crescent pools lock to create a circle that will hold the final two platforms. The third is chiselled and embellished stone – it is refined and decorated, but it still carries imperfections.The final platform is made of gleaming marble, shaped like a five-pointed star, set in the center of the two crescents. For coarse to fine, from stone to marble, the platforms chart the journey and eventual success of the Pakistan movement.

But what comes after independence, what is to be built on top of the white marble star; a new nation.

The Minar’s base is made of six large marble slabs bearing inscriptions that aim to capture the ideals of the Islamic state. The national anthem of Pakistan in Urdu and Bengali, excerpts from Muhammad Ali Jinnah’s speeches, Quranic verses and a few couplets of Dr Allama Iqbal are intricately etched on the base walls. As it rises the structure curves and opens up like the petals of an unfolding flower.This universal motif of prosperity is made from steel and concrete – the materials which built the modern world.

The tower rises to a height of 70 meters and is topped by a stainless-steel dome. The change was made at the behest of the government’s planning committee who wanted the monument to resemble a mosque’s minaret. Nusat-Khan had envisioned a top that gradually met at a sharp upward pointed spike – to represent the nation’s continued progress into the future.

Minar-e-Pakistan was completed after eight years in October 31, 1968 at an estimated cost of Rs7,058,000. It instantly captured the nation’s imagination with its pure idealism and its distinctive silhouette became synonymous with Pakistan overnight. But its story was far from over.

As Pakistan lurched from one crisis to the next the monument suffered with it. Iqbal Park fell into disrepair, the Minar’s white marble yellowed, the nearby tomb of Hafeez Jallandhari became a safe haven for drug addicts, and the grounds were repurposed for other activities. The Pakistan People’s Party government in Punjab even allowed dog races in the park in the 1970s. In 2016, under the Pakistan Muslim League-Nawaz, the reconstruction work on the Greater Iqbal Park began – today it is back to its original grandeur. Throughout all of this, Iqbal Park and Minar-e-Pakistan have remained an enduring symbol of the Pakistan movement. To this day, political parties – secular or religious, conservative or liberal – have all sought to launch their movement from Iqbal Park, under the shadow of the Badshahi Mosque, in a city that has been at the heart of the Muslim subcontinent for centuries.

FIND THIS EVENT ON :